Nancy Lindisfarne writes: Last week in Koblenz, Germany, a former Syrian intelligence officer, Eyad al Gharib, was found guilty of aiding and abetting crimes against humanity. It is an important verdict. It has formally exposed the scale, and appalling horror, of the crimes of the Syrian regime.

To mark this moment we are reposting a short story I originally published in Arabic in 1997. I did anthropological fieldwork in Damascus in the late 1980s, and from day one I saw the tyranny of the regime.  But I knew the whole time I was in Syria, and then again when I tried out the stories on friends in Damascus, that for their sake, I could only hint at the fear everyone felt.  As you can see here, the most politically explicit of my Syrian stories, ‘Fresh Apricots’, is little more than a bare whisper about a prisoner who has been fortunate enough to be released from Saydnaya prison.
.
In 1997, Mamdouh Adwan, the Syrian poet and playwright translated into Arabic a collection of short stories I had written after my year of fieldwork. Al Raqs fi Dimasq was published in Syria before an English version, Dancing in Damascus, came out in 2000.[4] But though a bare whisper, I also knew Syrian readers absolutely understood what I was trying to say.

END_OF_DOCUMENT_TOKEN_TO_BE_REPLACED

Nancy Lindisfarne writes: The lunar month which began in mid-June this year is the Islamic month of Ramadan, the month of fasting and charity. This is a story to mark Ramadan, and one day in the life of Basima. At forty five, she is still unmarried, on the shelf, and as the youngest daughter of a large Syrian family, she has become the sole carer of her elderly, difficult mother.

This short story  is set in Damascus in the 1990s, where I did a year’s anthropological fieldwork among well-to-do Damascenes. For me, unlearning academic writing and writing fiction was a lengthy and salutary experience. The impetus came from my anger and exhaustion at countering simplistic, popular stereotypes of Arab or Muslim women and men as fundamentalists, terrorists, or both. My hope then was that the stories might be a way to reach an audience beyond the academy. END_OF_DOCUMENT_TOKEN_TO_BE_REPLACED

For Valentine’s Day, here is something light – a story by Nancy Lindisfarne from DANCING IN DAMASCUS, her collection of short stories about Syria in the 1990s (SUNY, 2000). 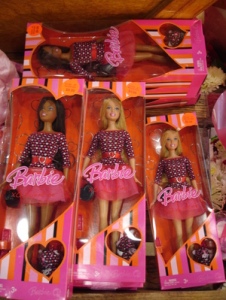 ‘Come on. I’ll help you if you want.’ Rana grinned. She was lively, shiny, like her curly dark hair. And she was a gorgeous shape. So he didn’t really mind that she was also saying he was hopeless, the kind of guy who didn’t have the gumption to buy a Barbie doll for his kid. END_OF_DOCUMENT_TOKEN_TO_BE_REPLACED